Now that we have a baby, travel will never look the same. Gone are the days of budget airlines and carry-on only. At least for awhile. If I’ve learned anything in the few short months of being mom it’s that everything takes more time than expected. From leaving the house to accomplishing a simple errand, it just takes longer. Sometimes it’s obvious…a diaper blowout, a crying meltdown or a forgotten diaper bag. But sometimes, I can’t figure out where the time goes, but it’s taken me twice as long! So when we were preparing for our first flight with baby, we made sure to allow for extra time.

Baby Travel Bug’s first flight was at 9 weeks old from Florida to Michigan, from one set of loving grandparents to another. We chose to fly Southwest Airlines because we were not just flying for a visit, but it was the first leg of our move back to Indonesia. So when we left Florida, it was with all our belongings. And Southwest’s baggage policy is the best for that. Another nice thing about Southwest Airlines is the choose your own seat policy & family pre-boarding. A wise mother of multiples suggested heading to the back of the plane and claiming three seats for us, hoping that if it wasn’t a full flight no one would willingly choose to sit in the back of the plane in the middle seat next to an infant. Good advice.

We arrived at Tampa International Airport with more than 3 hours until our flight. Again, planning for more time. Little Bug fell asleep in her car seat on the way, and when we arrived, I easily transferred her to my wrap sling for the time in the airport. [Side note: we were using a borrowed infant bucket car seat, planned on borrowing another in Michigan, and didn’t have a stroller. Hence the wrap]. She blessedly continued to sleep through check-in, security, and finding our gate. Did I mention we have the perfect baby [haha]?? She woke up as we were sitting at our gate, waiting to board. After a quick diaper change and a feeding, it was boarding time. We took our friend’s advice, and went right to the back…and right next to another mom with the same idea! Thankfully, it wasn’t a full flight and we did get three seats to ourselves, which made life so much more comfortable. 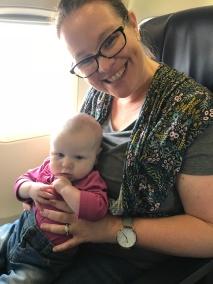 The flight was just under three hours, which was a good length for a first flight. She nursed great during take off, which helped her little ears adjust to the pressure change. Once we were at altitude, she was completely chill and happy. We brought toys and a blanket to help entertain her, but at 9 weeks, she doesn’t need much entertaining. One cool piece of gear we used on the flight was a FlyeBaby seat, which hooked in the tray back in front of me and around my lap. It created a little hammock seat for Baby Travel Bug, where she promptly fell asleep. At 9 weeks, she was already a bit long for it though, but if the seats were further apart, I bet she would have fit better. It’s definitely not a infant safety seat, and not to be used during take off, landing, or in turbulence. But for the hour long nap she took, it worked real well. She nursed again during landing, and just like that, the flight was over. We put her back in my sling and left to collect our baggage. Our first major travel milestone with a new baby was a success!