On our last trip from Indonesia to America, we had booked a crazy flight combination. We pieced together a few routes and ended up with a super cheap flight with two long layover in countries we hadn’t yet visited. I was so excited to explore Seoul and Tokyo on these layovers. I love planning trips to new cities and countries. Sometimes, I make travel plans for fun. So I was ready with a long to do list of must-see, must-do, and must-eats in both South Korea and Japan. And then I found out I was pregnant. And then we realized I would be flying at 30 weeks of my pregnancy. I was just hoping to leave the hotel honestly.

Our first long layover was in Seoul, South Korea. We arrived earlier in the day, after an overnight flight from Kuala Lumpur, Malaysia. It was too early to checkin to our nearby hotel, so I summoned the energy to explore a new city. Thankfully, downtown Seoul is accessible from Incheon Airport by a pretty fast train. We got off the train in Seoul Station, but transferred to the local metro to check out my number one must-see in Seoul: the Cheonggyecheon River. The Cheonggyecheon River is a is a 10.9-kilometer-long (6.8 mi) creek and nature space running through the middle of urban modern Seoul. It’s beautiful to walk along and take in the design and creativity along the waterway. From bridges to waterfalls and artistic murals and landscapes, it was a beautifully peaceful and a great spot to see in downtown Seoul. It reminded me a little of Central Park in New York City, a green space in the middle of a concrete jungle. From the Cheonggyecheon River, we wandered through the shops of Myeong-dong shopping district and found a Korean bbq place tucked away down a side alley. We’ve eaten Korean bbq in the past, but never in Korea. So we were happy the waiter had some limited English, a limited English menu and the grace to prepare all the food for us because we had no idea what we were doing! But it was delicious. And that was our trip to Seoul. We took the metro back to Seoul Station, and from there back to the airport to get over to our hotel for the night. It wasn’t the whirlwind 10 stop walking tour of a major Asian city that I was hoping for, but it was a tiny taste of Seoul that left me hungry to go back for more one day. 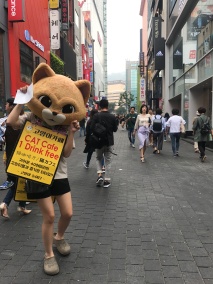 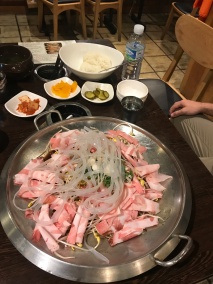 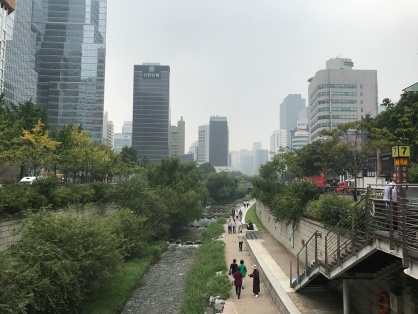 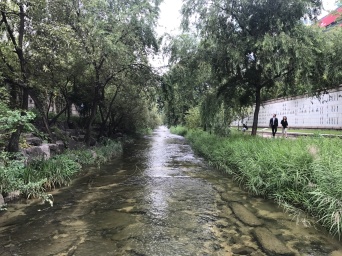 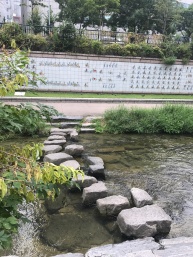