For me, it began in January 2016. I had seen a few Facebook posts and Internet articles about this Broadway show called Hamilton: An American Musical. I can’t say I remembered much about Alexander Hamilton from history class past the $10 bill and the milk commercial. But the cast album had reached #1 on Billboard’s RAP CHART. And I was curious. So I opened Spotify and began to listen to an album that would impact my entire year.

I was immediately captivated by the album. I’ve been a HUGE Broadway fan for years, but less of a rap & hip-hop fan. Still, I was hooked. However, I admit I had to open the Wikipedia page for the show to fully follow what was happening. But soon after my first listen, I went back for more. And more. And more. Until it was all I was listening to. Each time I listened, I heard new lyrics and understood new levels of creativity and significance in the words. Then, came the podcasts.

I’m relatively new to the world of podcasts, only since late 2015 have I been a complete podcast addict. And so in my podcast immersion, I found PodForHam, which took my fandom to a new level. Each week, a group of panelists would talk about just one song on the album, and bring even more thought and insight into this recording that I already loved.

Then, YouTube. Not only was I constantly scouring for show clips, but I religiously followed the Hamilton YouTube Channel for the latest Ham4Ham show. I found the circa 2009 White House performance, and the 2016 White House revisit. I loved the music, and the genius in the writing. Now, I was falling in love with the creators & cast. Lin-Manuel Miranda, you were my 2016.

I watched the show win award after award.

I listened to the Mixtape.

I devoured the Hamiltome, or Hamilton: The Revolution, the epic chronically the birth of this show.

I followed the Hamilton SnapChat.

I watched & rewatched the PBS special on Alexander Hamilton and the musical.

And finally, I got tickets.

See, we live in Asia [in case you didn’t know that], but we were traveling home to Florida in the States for my sister’s wedding in the fall. And we were flying round trip through Chicago because my husband’s family was nearby. Guess what else was coming to in Chicago in the fall of 2016?

The day, the hour and the minute the tickets went on sale, I was ready. I was on the Ticketmaster website hoping & praying against all odds that we could get tickets. The website continued to crash. My phone wouldn’t load. It was 11pm Asia time. But I was committed. I took to Twitter. Someone on the #HamiltonCHI hashtag feed talked about scoring tickets with the automated phone service. I was in it to win it. And I won. We got 4 tickets to see it the day before we flew back to Asia.

November 2016, we were in Chicago. Ready. Seats in the balcony, center stage. The lights dim and the orchestra swells. And the ever-so familiar chords begin and the music becomes alive on the stage before me. Characters I’d only seen in my head, now dancing and singing and rapping in the flesh. Part of me wanted to sing every single word, the other part sat in rapt awe. 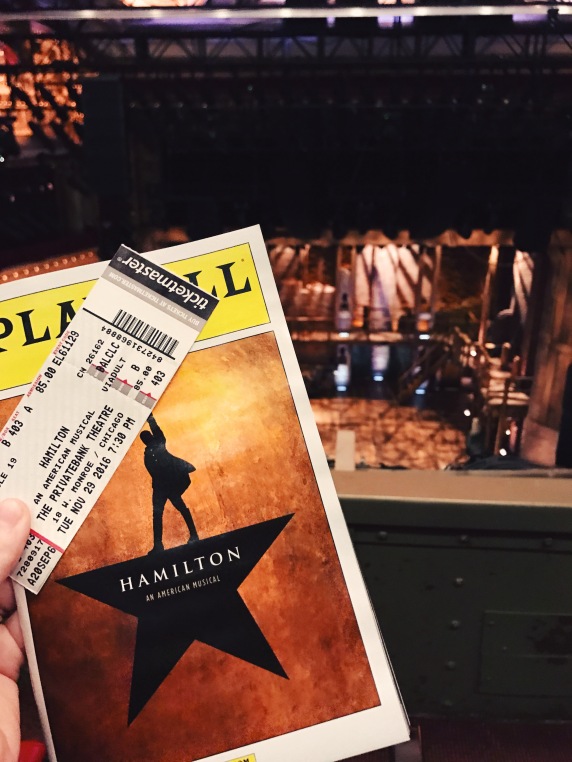 Ready for the show to begin

Great seats with the family 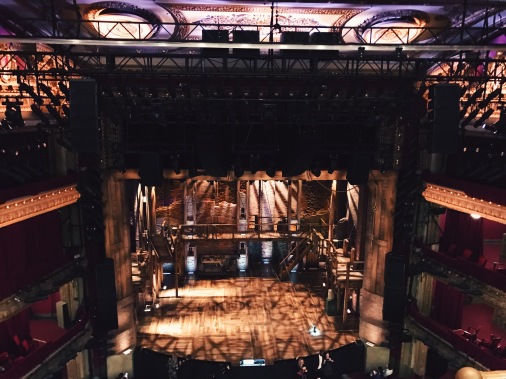 I don’t actually think I can put into words the full experience, you just have to see it. But here’s what I remember most. The company, the surrounding dancers and vocalists, BRING THE SHOW TO LIFE. Always moving, never still, they create an impressive atmosphere. I couldn’t stop watching their every move. The set was epic. The choreography was stunning. Each character simply shined. I was especially struck by the performances of Hercules Mulligan [played by Wallace Smith] & King George [played by Jin Ha]. I love their songs and moments during the cast recording, but their presence on stage stole the show. I couldn’t watch anyone else but them while they were on stage. The number which most surprised me was The Reynolds Pamphlet, a song I love on the cast album, but was a show stopper live. THERE’S SO MUCH HAPPENING ON STAGE! Not surprisingly, Satisfied, Wait for It, and The Room Where It Happens brought down the house. I loved Hurricane SO MUCH MORE live as well [sorry, Lin]. I openly wept during It’s Quiet Uptown. So many emotions in one night! It was literally a dream come true.

How could a perfect night get more perfect? We were able to go backstage. A friend of a friend was part of the ensemble and graciously offered to meet us backstage and show us the set, up close and personal. She was lovely, and an incredible dancer in the show. The stage is even more magical when when standing on it. What an experience.

On stage with Sam, part of the Hamilton Chicago company

I wish I could explain why this show has impacted me the way it has. 2016 was a controversial year in modern American politics, and it was almost refreshing to rediscover that American politics were controversial in 1800 as well. The show captures what I love most about America… which is everything from a poor immigrant working his way up to a national leader who steps down without fuss or bloodshed. Watching President Obama step down and hand the office over to President Trump in January, all I could do was sing One Last Time. I love the fact that I couldn’t live further away from America, yet this album and social media frenzy impacted me. It’s universal. Throughout the musical, Alexander Hamilton is wrestling with his legacy and how he is going to be remembered. It’s a love story & it’s tragedy, it’s political backstabbing & it’s war battles. It’s hope, regret, accomplishment, love and loss. How can you not love this?

So this is my love letter to Alexander Hamilton, to the musical, and to Lin-Manual Miranda and the others who brought this show to life. I hope it runs for years and I get to see it many more times. See it when you can, however you can. It really does blow us all away.


Check out my SnapChat Story from Chicago and Hamilton!!