A few days ago, Jakarta was stunned by terror attacks. According to news reports, 6 explosions were set off Thursday morning in the heavily populated capital city of Indonesia. Witnesses recount attackers riding into downtown on motorbikes with rifles and open firing. There’s still been conflicting reports regarding the number of victims and injured, but it appears to be rather low number, considering the scale of the attackers. The last terror attack on Jakarta was back in 2009. ISIL has taken credit for Thursday’s attack.

In the world’s most populous Muslim nation, we’d be naive to think that ISIL wasn’t attempting have a presence in Indonesia. And after attacks in Paris, Istanbul and others, the only natural response should be fear. But that’s not how the Indonesian people are responding. They are beautifully standing up with a resounding fearlessness.

Indonesians, with all their social media savviness, have taken to various platforms with the hashtag, #kamitidaktakut, which translates we are not afraid. They are posting prayers, selfies, photos of normal everyday life, like holding Starbucks cups. My favorite image to surface in this “we are not afraid” movement came from beautiful Bali. It’s a shot of surfer raising high the Indonesian flag. It’s been shared, blogged and tweeted as an image of standing up against terror in the most Indonesian way possible. 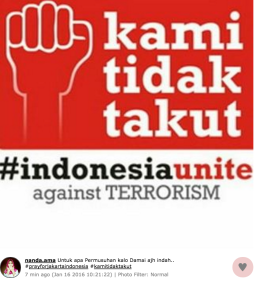 Over the last few days, I’ve been thinking about fear and terrorism. We live in a broken world where evil exists. It’s a part of life, whether I’m home in America or here in Indonesia. But it’s our response to evil that matters. I choose not to be afraid, just like my Indonesian brothers and sisters. I choose to look for the good in all people, and bring it out in those around me. I choose to cling to my beliefs, living out hope, peace, justice, faithfulness, kindness, freedom and joy. I choose to live the life I am called to, not hide in fear because of “what if”. And I choose to trust in a God bigger than myself and bigger than terrorism.