And after 6 months in Asia, I find myself in America once again. It was trip that took so much planning, so much effort & money, and now it’s over. It’s bittersweet really, we missed our family and friends so very much. But now my heart misses Asia so very much. Sometimes I’ll walk into a restaurant or down a street and catch a whiff of something that immediately takes me back…in good and bad ways. Asia doesn’t always have the best smells! But it’s familiar and makes my heart ache.

It’s funny to recognize the little ways I became Asian this year. I still take off my shoes when I enter a home, even without asking. It became second nature in every country in Asia, for both culture reasons and sanitation reasons. And now, I still catch myself doing it. Another weird habit I picked up involves the toilet. No, not using squattie potties, I don’t think that will ever be my preference! But in Asia, we almost always throw the toilet paper in the trash, NOT the toilet. Maybe it’s a plumbing thing, I never found out. But after a few months, even that became a habit…I realize now. While no one really objected to me taking my shoes off at their place, they may object to the toilet paper thing. Just a hunch.

Even my vocabulary has changed! I live in Florida, where air conditioning reigns supreme. And after so much time in Asia spent sitting beneath the cool, crisp air conditioning or scouring hotel bookings until we found one which offered it, it’s now “air con” to me. Not A/C, but “air con”. I didn’t even realize it was weird and unAmerican until someone pointed it out. Oops. My Asian side is showing again.  When we go to leave somewhere, it’s no longer Let’s go!, but zou ba! which is Mandarin Chinese for the same phrase. So much more fun to say.  Our children will be quite confused if we continue implementing not just one, but multiple foreign languages into our regular conversations.

I make Thai iced milk tea at home. We cook Indonesian chicken satays in peanut sauce. I crave bubble milk tea regularly. Only steamed dumplings will do. My travel map has more pins. But as much as I’m happy to be home in America, I’m ready to go to back to Asia. My heart has been grabbed & transformed for a new part of the world. I will go back. I will call it home. 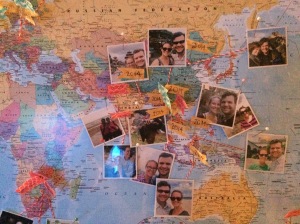